Android 7.1.2 beta now rolling out to the Nexus 6P 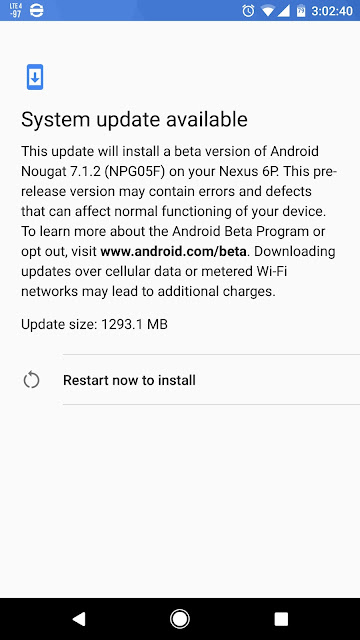 The Nexus 6P: Great phone, but occasionally left out of some of the recent Android beta fun.

Last month, when Google announced Android 7.1.2 for a bevy of Nexus devices, along with the Pixels, the Nexus 6P was conspicuously absent from the list, without explanation from Google. Even its cheaper, slower counterpart, then Nexus 5X, was invited.

It’s been a long month for those Nexus 6P owners waiting for their near-1.3GB update, but it’s here, along with the requisite bug fixes and performance improvements that came with it. The build is NPG05F.

I’ve been running it on my Pixel XL since day one and have yet to experience any problems — and I sidestepped the soon-to-be-resolved Bluetooth dropout issues at the same time, thank goodness — so I’d say if you’re itching to try it, go right ahead.