There’s something refreshing and low-stress about playing a mobile game without in-app purchases. Knowing that you’re spending a couple of dollars to get an entire game that you can actually finish from beginning to end without being hounded to buy coins or gems or some other sort of in-app currency really makes the experience better.

(If you don’t mind some in-app purchases, you should check out our roundup of the best Android games of the year!)

Here are the best Android games without those pesky IAPs! 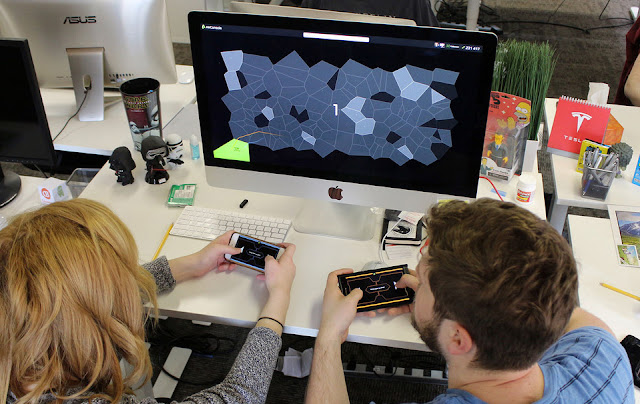 This futuristic, story-driven crafting RPG is big on laughs, thoughtful gameplay, and FUN. Honestly, watch the trailer: it might just be the greatest of all time.

You play as Flux Dabes, a space-trucker who becomes stranded on an alien planet thanks to a jerk of an alien criminal called Hewgodooko. As you try to survive on this alien world, a plan for world domination slowly rears its ugly head and you become embroiled in the race to save the planet, all while trying to just retrieve your missing cargo and get your job done.

The crafting element comes into play as you defeat local wildlife, using their parts to create weaponry, furniture, health packs, and tons more. There are upwards of 468 different recipes for you to try, including a stem cell pack for replenishing your health (not even joking).

If you love a great RPG, and love to laugh even more, then Crashlands should be on the top of your list. It’s worth the money. From a developer called Butterscotch Shenanigans, you really can’t expect anything less.

You play as cute, mustachioed, green puffball Leopold on his quest to retrieve the gold that was so wrongfully stolen from him.

As you track down the cunning thief, you get to traverse gorgeous forests, barren deserts, pirate cities, and mountains, while solving physics-based puzzles and surviving terrible traps. As you follow the trail of gold, you unlock the mystery behind Leo’s stolen riches.

Once you beat the game, you can unlock Hardcore Mode, wherein you attempt to beat the entire game without dying. You can also compete with friends in speed runs.

If you’re into gorgeous-looking games with a fun story and consistently active gameplay, the award-winning Leo’s Fortune is totally for you.

If you’re a console or PC fan of the Grand Theft Auto franchise, then why not extend your fandom to Android?

Rockstar Games has five great GTA titles for you to choose from and you really can’t go wrong with any of them. Play through Liberty City Stories, San Andreas, Vice City, GTA III, and Chinatown Wars and get your shoot-’em-up, blow-’em-up, car-stealing fix on mobile!

Chinatown is your classic top-down GTA, while the other three are the third-person-shooters we’ve all come to love. On that note, these games are NOT for kids. The Mature rating in the Google Play Store isn’t lying.

So, if you want full Grand Theft Auto games right on your phone, hit up the Google Play Store and go to town. Just remember that, since these are the full games you now and love, they will occupy a ton of space on your device.

The title pretty much says it all, but whether it’s the way each character dies or just the characters that are dumb is up to you entirely.

This game will frustrate you to no end, but in a fun, quirky, and always-entertaining fashion. You get to play 15 goofy mini-games, hoping to unlock all the characters and the ridiculous music video that started it all.

You’ll have to contend with piranhas, snakes, platforms, bombs, and much more as you just try to keep some idiots alive (parents, you feel me?).

The best part of Dumb Ways to Die? It’s FREE! Better yet, it’s free and there aren’t any in-app purchases. Download it now and prepare to be frustrated but laughing all the way through!

Parents, take note that this game is rated T for Teen, since it does contain some crude humor and blood.

If you like a challenge, and I do mean an incredibly frustrating challenge, then give Super Hexagon a whirl and see just how patient you really are.

Gameplay is like every closing-door scene in an action movie where the opening gets smaller and smaller as the protagonists rush to escape, á la Indiana Jones.

Players have to navigate a triangle through a geometric maze of sorts that’s spinning and continually collapsing into itself. If you hit a wall, that’s the end; you have to start all over again.

The soundtrack is excellent and the three stages will keep you more than busy, especially as you unlock the near-impossible versions of each stage as you reach certain goals.

Enter a world set in a beautifully rendered, futuristic steampunk dystopia, where you play as Josef the robot, on a quest to save his girlfriend.

You’ll have to solve a series of puzzles at each point in the game in order to advance to another part of the city, and you can even uncover easter egg back story scenes when you idle in certain areas.

As Josef, you tap items to solve the puzzles and brain teasers, but in an interesting twist on the genre, you can only tap whatever’s in Josef’s reach.

There is no dialogue and aside from the odd tutorial, everything is devoid of language. Instead, pictographic thought bubbles let you know what’s on Josef’s mind to help you work your way through the game.

If you like a great adventure game with a fun story and great graphics, Machinarium should be your dystopic go-to.

One of the best puzzlers of all time is available for Android and should be on your device now. World of Goo lets you build all sorts of structures out of balls of goo, creating buildings, vehicles, and even giant tongues and zeppelins.

You get to play through four chapters and an epilogue, each containing multiple levels, which differ from each other in graphics and music, so everything feels fresh as you try and get your goo balls to the exit.

There’s even a bonus game within the game called World of Goo Corporation where in you endeavor to build the tallest tower you can, using the goo balls that you acquired throughout the game. You can compete with players from all around the world and the developer, 2D Boy, is constantly updating the height of the tallest tower and how many goo balls are being used.

This is a light and cheerful puzzler that’s head-scratchingly fun and addictive.

Freja and the Sequel

If you’re into some out-there humor and a quirky interactive story game, Freja and the Sequel might be just what you’re looking for. It’s your classic point-and-click adventure turned upside down by “humor, horror, and surrealism.”

Freja, a computer nerd, is forced, at gunpoint, to develop a sequel to a popular video game and as she creates it, she becomes more absorbed in her work until reality itself comes into question and things start to get hella weird.

Throughout the game, you’ll meet weird characters while solving some pretty tough puzzles, all while being stalked by a shadowy creature that resembles Freja.

This is definitely not a game for kids, since it contains quite a bit of swearing, some horror elements, drug references, and some perverse humor.

If you’re looking for a break from the run-of-the-mill mobile games you’re used to, then check out Freja and the Sequel and prepare to be pleasantly weirded out.

The horror masterpiece Five Nights at Freddy’s is on Android and it’s ready to scare your pants off and back on and then off again. The fourth instalment of the wildly popular franchise is very involved and will keep you on your toes as you try not to be mauled by horribly disfigured animatronics come to life.

You play as a child whose role in the saga is only discovered at the end of the game. You must defend your bedroom from Freddy Fazbear, Chica, Bonnie, Foxy, and worse, as you just try to survive until morning.

You have to keep track of both bedroom doors, your bed behind you, and your closet, where Foxy likes to hide, jump out of, and murder you.

With just your flashlight to protect you, clench your butt through six in-game hours of torment and terror. If you startle easily, this isn’t the game for you.

If you’ve just been playing the horror-fest that is Five Nights at Freddy’s 4, then you’ll need a palate cleanser of the relaxing variety. Enter: Prune. This isn’t your typical mobile game in a big way; this is a tribute to the beauty of trees and a calming lesson in the art of cultivation.

To start, you draw a line from the base, then your tree starts to sprout from that line. As time goes on, you have to trim certain branches off, which causes other parts of your tree to grow bigger and in other directions. At times, the sunlight will change and you’ll have to shape your tree so that its branches can touch the golden rays.

This is just about as soothing as it gets for mobile gaming, bringing nature and technology together in a beautifully synergistic experience. Bask in zen and find your inner horticulturist while you gently grow your precious tree, branch by branch.

If you’re looking for a calming experience to take you out of your world for a little while, then download Prune and chill out, man.

One thought on “Best Android games with no in-app purchases”