According to Google, this “incremental update” builds on the strengths of Android 7.0, but adds some important new features, including Daydream support, A/B system updates, an app shortcut API for the new default launcher, and the long-awaited ability to use image keyboards. 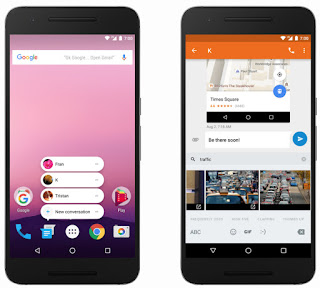 Available as a Developer Preview later this month, Android 7.1 won’t be bundled with Google Assistant on regular Android devices — as expected, that’s a Pixel-only feature for now — but it will have support for many of the features we saw previewed on those phones earlier in October. This includes an API for rounded app icons and improved wallpaper filtering, as well as the aforementioned app shortcut support that will allow for five “key actions” taken directly from the home screen icon.

Google is also highlighting two important features for developers, though they also spill over to users: image keyboard support, which allows for non-text overlays as primary input methods; and storage user intents, which allow developers to send users to a screen that can “clear unused files and free up storage space on the device.”

The Android 7.1 Developer Preview will be released towards the end of the month for the Nexus 5X, 6P and Pixel C, according to Google, though the final release will include all devices, such as the Nexus 6, Nexus 9, Nexus Player and select Android One devices, that were included in the wider Nougat rollout.

It also appears that the Pixel and Pixel XL will receive an update to Android 7.1.x — whatever the public release is called — when it is released in “early December.” It remains to be seen if most manufacturers already testing Nougat for their flagships will skip Android 7.0 altogether and move to 7.1.1, since Google says it is “working with our partners to bring Android 7.1 to devices in the ecosystem over the months ahead.” Hopefully, devices like the LG V20, which ships with Android 7.0, and those being updated imminently, like the Moto Z, will not be negatively affected by this ambitious rollout plan, since they likely knew of Google’s intentions far earlier than the public.