Google’s Allo is now on a desktop

Google Assistant is coming to the desktop through Allo.

One of the main drawbacks of Allo has been the lack of a desktop version, but it looks like that’s about to change. A tweet from Google’s VP of Communications Products Nick Fox shows a screenshot of Allo running on the desktop. 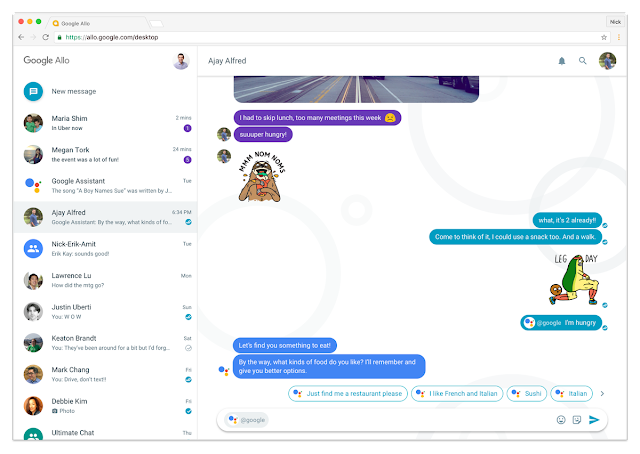 From the screenshot, it looks like Allo will follow in the footsteps of WhatsApp, offering a web client that runs in your browser before rolling out a full-fledged desktop app. The web version will support Google Assistant, and offer similar functionality as the mobile app, including emojis, stickers, smart replies, and the ability to share media.

It’s unclear if the web version of Allo will be an extension of the phone, like WhatsApp, or if Google is looking to pull information directly from the cloud ( Hangouts). The latter could mean that Google is lifting the one-device limit, making Allo available on multiple devices at the same time.

We don’t know how the signup process will work, or how the app will sync messages. Fox tweeted that the desktop client is in “early development,” so it could be a while before it’s available for all users.

As for Allo itself, interest in the app nosedived after the initial weeks, mainly because of its limitations when compared to other messaging apps. Allo still doesn’t offer a way to restore messages when switching devices, the app lacks SMS integration, and you can’t make calls using the service.

With WhatsApp steadily rolling out new features and offering an all-in-one messaging platform with voice and video calls, it’s getting harder to convince people to switch to Allo just for the sake of Google Assistant.

2 thoughts on “Google’s Allo is now on a desktop”