Here’s how Google is connecting the next billion users.

At its Google for India event, the search giant talked about connecting the next billion users. Google is looking to India as a key market for growth, and as such the company is debuting a host of new features that will be exclusive to Indian users initially. Google kicked things off by talking about the incredible growth in the country, stating that every single second, three Indians are making their way online for the first time.

Our goal has not just been to help more Indians get online — but also to help Indians create the online experience they want; one that serves their needs and enables them to have an impact on the entire world. So we have been thinking about how to build products and services for this wave of new users — products that work for any level of connectivity, in local Indian languages, and across the devices that are most frequently used in India.
The company’s free Wi-Fi initiative got off to a great start, and Google is now expanding the platform. With average broadband speeds hovering around the 3Mbps figure, Google is optimizing its services to work better on 2G connections. Here’s what’s in store for Indian customers.

Play Store gets optimized for 2G

We’re starting to see 4G networks take off in India, but the reality is that a majority of customers still rely on 2G connectivity. To provide a better experience to these users, Google is kicking off a version of the Play Store that is optimized to work on 2G connections. Users in the country will be able to schedule app downloads, and Google is also offering a “Wait for Wi-Fi” option that defers app downloads to save on cellular costs.

YouTube Go is designed for offline usage. Building on the Smart Offline feature that debuted earlier this year, YouTube Go lets users easily download videos. The app shows how large a particular file is before the download commences, and users have the ability to choose 720p and Full HD content for offline viewing as well. The app also shows previews of videos, giving users more options when it comes to managing their data bandwidth. 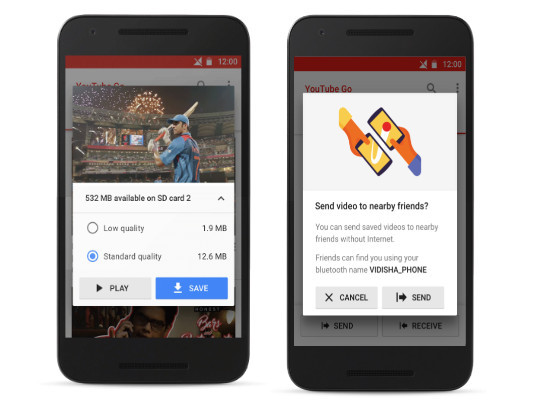 YouTube Go is a brand new app to help the next generation of users share and enjoy videos. YouTube Go was designed and built from the ground up with insights from India, in order to bring the power of video to mobile users in a way that is more conscious of their data and connectivity, while still being locally relevant and social.

Save entire pages and videos with Chrome

Chrome has a built-in Data Saver mode that compresses data, and starting today, the feature works with MP4 videos as well. All downloaded content is accessible from a new Downloads tab, and Google is claiming that the feature will see bandwidth savings of up to 67%.

Google’s smart AI utility — Google Assistant — made its debut with Allo. The Assistant currently has limited support for Hindi, but Google has announced that native Hindi support will be added before the end of the year. Hindi is the fourth most-spoken language in the world, and by allowing conversations with the Google Assistant in Hindi, Google has the potential to attract a large customer base for Allo.

Google also talked about its video messaging app Duo, stating that after the U.S., India is the second-largest market for the app. Give how well Duo works on poorly-optimized connections, I’m not surprised.

Knock knock! Most Duo users are from India and the US.
Also, coming soon: The Google Assistant in Hindi. #GoogleForIndia pic.twitter.com/jXejchZmmb

Free Wi-Fi for everyone

Since making its debut last year, Google’s public Wi-Fi initiative has amassed 3.2 million active users, with 15,000 joining every day. 52 railway stations across the country now offer free Wi-Fi, and the service is set to go online at over 100 stations by the end of the year.

Google is now expanding on its earlier missive with Google Station, an initiative that sees the company partnering with “large venues and organizations, network operators, fiber providers, system integrators and infrastructure companies” to make fast, reliable Wi-Fi accessible. Partners signing up also have the ability to monetize Google Station hotspots by rolling out access fees or ads.

300 million users have made their way online in India, and that number is set to double over the next four years. Google hasn’t fared particularly well when it comes to making accessible devices with the Android One program, but its latest initiatives should find more success. Most companies don’t offer enough in the way of localization for Indian users, but by adding native Hindi support in Google Assistant and allowing users to converse in their local languages, Google is on the right path.