The rebirth of another storied smartphone brand begins. This time it’s Nokia.

Nokia is still a company that is focusing on their core business: networking technology. They’re quite good at it; there’s a good chance you’re using Nokia tech on a regular basis through your cellular network, even if it’s not a Nokia. But the Nokia brand? That’s all about smartphones. And while Nokia knew that, they also sold their phone business to Microsoft in 2015 (which Microsoft has struggled to turn into a successful business as well). So with no phone business of their own and a bunch of disgruntled former Nokia/Microsoft employees, HMD was born.

HMD is licensing the Nokia brand to produce phones bearing the Nokia name, look, and spirit (much as BlackBerry has licensed their brand to TCL and produced the BlackBerry KEYone). Nokia’s new phones are a departure from the old ones in one very important way: gone is Windows, all hail the new Android-powered Nokia.

While Nokia might come out with some higher-end devices in the months and years to come, the Nokia 3, 5, and 6 are decidedly low-end phones. But don’t let the low-end specs or prices fool you — these are shockingly nice phones.

On the bottom rung of the new Nokia smartphone line-up is the Nokia 3. This 5-inch phone is powered by a lowly MediaTek 6737 processor (a quad-core 1.3GHz chip) and sports 2GB of RAM and 16GB of internal storage, plus microSD expansion support. It’s certainly not a powerhouse phone, nor should you expect it to be. The IPS LCD is a respectable 1280×720 (that’s 294ppi at 5 inches), while the cameras are 8MP on the front and back — both are ƒ/2.0 lenses with 1.12um pixels.

This phone has a two-part construction that will be familiar to most Nokia fans, with an aluminum unibody frame and a polycarbonate back plate. It’s fairly reminiscent of the old Nokia 925. It feels really solid and comes in your choice of a silver+white, black, dark blue, and a sexy copper frame with a white back. There’s no fingerprint reader here, and there’s a trio of capacitive navigation buttons under the display. 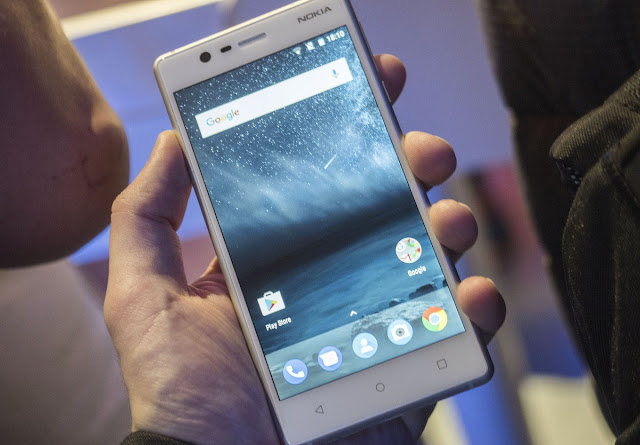 Software-wise, the phone’s running Android 7.0, and aside from the custom camera app is “pure” Android, down to using the same launcher as the Pixel phones. Despite the low-end hardware, in poking around the phone it was actually nicely responsive. Just goes to show what kind of experience you can get on even middling hardware when you don’t load it down with bunches of poorly implemented customizations.

The phone itself measures 8.48mm thick (so not the thinnest, but also not bulky) and packs a Cat. 4 LTE radio and 2650mAh battery. The only real knock against the phone is one that’s somewhat understandable, given the price point, and that’s the Micro-USB port instead of the modern USB-C. But at just €139, there’s only so much you can ask for.

The Nokia 5 comes in a bit larger and a bit more powerful. It bumps up to a 5.2-inch IPS display, though still with a 1280×720 resolution (that’s 282ppi at this size) and swaps the MediaTek processor for the Qualcomm Snapdragon 430 chipset. It has the same 2GB of RAM, 16GB internal storage, microSD expansion, and Cat. 4 LTE support. The rear camera in the Nokia 5 has seen an upgrade, jumping to 13MP, though still with 1.12um pixels and an ƒ/2 aperture lens. Again, the Micro-USB port makes a sad appearance, providing power to a 3000mAh cell. 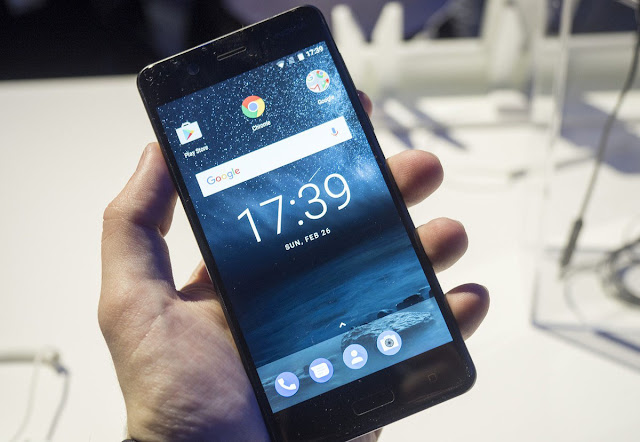 A fingerprint sensor sits front-and-center below the display, taking the place of the home button, though it’s still flanked by capacitive back and multitasking buttons. The body of the phone is a single piece of machine aluminum, coming in silver, black, dark blue, and copper, though all have black glass fronts with lightly curved edges. While it’s hard to do a machined aluminum phone without making it look like an iPhone, HMD set the Nokia 5’s antenna cutouts along the top and bottom of the phone — as if the iPhone 7’s plastic-inlay strips had been shifted slightly off the backside.

The end result is a phone that simply feels and looks great, and at €189 it’s an easy sell.

The current top end of HMD’s smartphone line-up is the Nokia 6. This phone was actually launched in early January 2017 in China, but is now making its global debut at the starting price of just €229 in matte black, silver, copper, or “tempered blue”.

For that price, you’re actually getting a really decent phone. Running on top of a Snapdragon 430 CPU with 3GB of RAM and a 32GB internal storage drive (plus microSD expansion) is a 5.5-inch laminated IPS LCD panel with a full HD 1920×1090 resolution. While it looked a little yellow, it was admittedly hard to judge in the blue-hued light of the event venue. 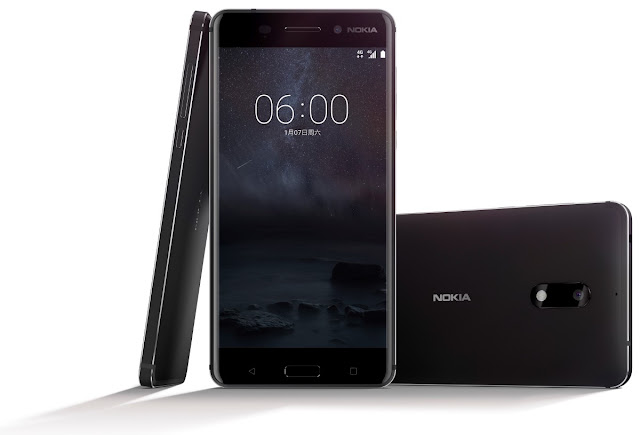 The rear camera’s been bumped up to a 16MP sensor (with smaller 1.0um pixels) behind a ƒ/2 lens, along with a dual-tone LED flash. The machined 6000-series aluminum body is simply beautiful and solidly built (as one would expect from a phone bearing the Nokia name).

Like the Nokia 5, you’re looking at a bottom-front mounted fingerprint sensor flanked by capacitive navigation buttons and antenna cutouts that have been pushed to the very edge. The curved edges of have been swapped for more angled ones, with the front sporting a crisp chamfer.

You like your black aluminum Nokia Android phones shiny? Then you’ll want Arte Black edition of the phone. They’ve taken the aluminum body and polished it five times over and then anodized it black twice. Oh, and they upped the RAM to 4GB and the internal storage to 64GB. Otherwise, it’s the same phone, just a shiny blank fingerprint magnet. 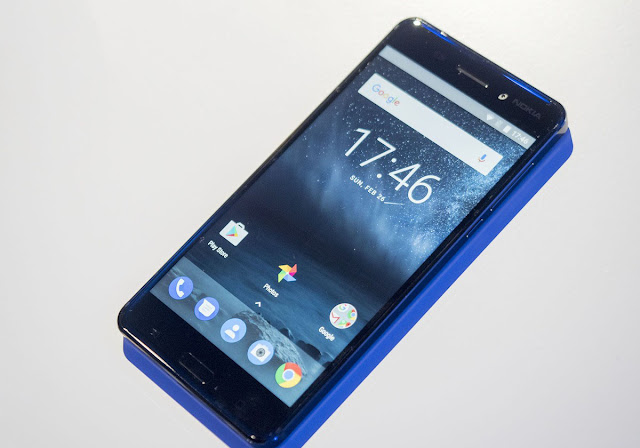 HMD has taken a very spartan approach to the software; the Nokia series of phones is running Android 7 Nougat with barely any customizations — the only visible non-Google app was the camera app, which isn’t a bad thing considering how minimal the Google Camera app is.

They’re committing to staying on top of security and OS updates, which should be made easier by having stayed on the light side for their customizations and standardized as many components between the devices as possible. It’s a question of if they’ll be able to deliver, however. Nokia is merely the brand, and while HMD is full of veterans from Microsoft and Nokia, they’re also a small and new company with limited resources. At least they won’t have to worry about managing an entire manufacturing supply chain as Nokia did — HMD has outsourced their manufacturing to Foxconn — the same company that makes the iPhone (no wonder the Arte Black Nokia 6 looks familiar).

The trio of Nokia phones will be launching globally in the second quarter of 2017, with HMD putting special emphasis on getting the new phones into the developing markets where the price-to-performance ratio will be most appreciated. 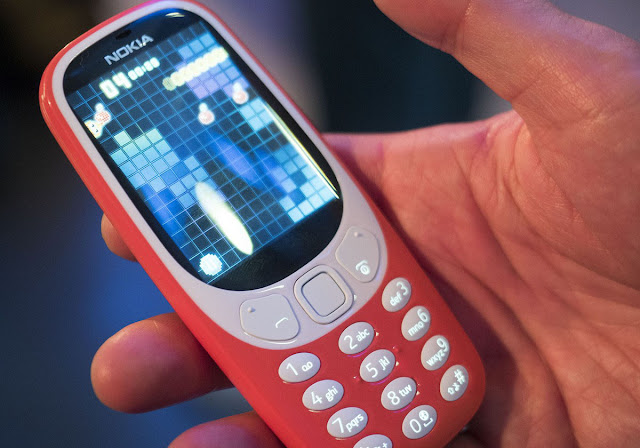