The JioPhone will come with unlimited data for just Rs.153 a month.

Reliance chairman Mukesh Ambani has unveiled the JioPhone, a feature phone with 4G and VoLTE connectivity that “reinvents the conventional feature phone.” The phone will be up for purchase from September, and you’ll need to pay a deposit of  Rs.1,500 ($25) to get your hands on a unit. Where things get interesting is that the deposit is fully refundable after three years, making it essentially free. 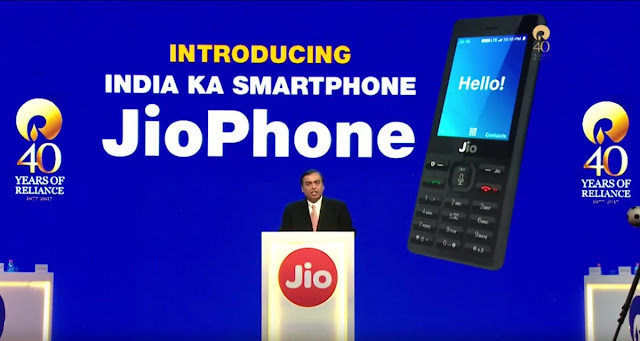 The JioPhone will come bundled with apps like JioCinema, JioTV, and JioMusic, giving customers access to the carrier’s digital catalog. For Rs153 a month ($2.50), Jio is giving free voice calls, texts, as well as unlimited data and unfettered access to Jio’s content library. There’s also a Rs.309 plan ($5.0) that will give JioPhone customers the ability to mirror the screen to a TV via a cable.

Alongside Jio’s own apps, the JioPhone will offer access to Facebook, and there’s also a custom web browser through which customers will be able to browse the web. The phone will also have voice commands, and will be able to recognize 22 local languages.

With the JioPhone, Jio is aiming to end India’s “digital inclusion.” Out of 780 million active phones in the country, over 500 million are feature phones that offer little to no access to the internet, and it is this segment that Jio is actively targeting with its latest device. Ever since making its debut ten months ago, Jio has fundamentally changed the way Indians consume data, with the country now surpassing the U.S. and China for mobile data consumption.

Indians are now consuming 1.2 billion GB of cellular data per month, with Jio serving 85% of that traffic. The carrier has picked up 125 million subscribers in just under a year, and by rolling out a feature phone that will be available across the country, Jio is looking to significantly increase its userbase.

Jio is kicking off a beta test on August 15 — India’s 70th Independence Day — where it will make the JioPhone available in a few batches, and the device will go up for pre-order on August 24. General availability is kicking off from September, with Jio aiming to manufacture 5 million phones a week to meet the inevitable demand.