Jun 13, 2017
The whole world has been waiting in earnest for Nokia’s Android smartphones ever since HMD Global took to the stage at MWC 2017 in February. The day of their launch has finally arrived – HMD Global is set to launch the Nokia 6, Nokia 5 and Nokia 3 in India today at an event in New Delhi.  Hours before the launch however, the Nokia 6 has been allegedly spotted on Amazon India. 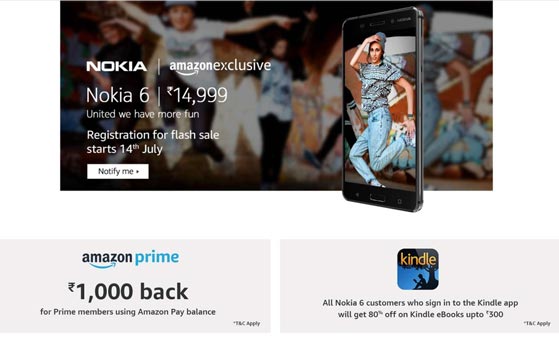 Spotted by user Ishan Agarwal on Twitter, the listing shows the Nokia 6 priced at Rs 14,999 and as an Amazon India exclusive. The product page also says that registrations for flash sale will begin on 14th July. Amazon is also apparently offering a few launch offers – Rs 1,000 back for Prime customers if they pay using Amazon Pay balance as well as 80% discount on Kindle eBooks up-to Rs 300 for everyone who purchases a Nokia 6.