After concluding the beta program last week, Samsung announced that it would roll out the stable Android 7.0 Nougat update to the Galaxy S7 and the S7 edge later this month. The company is now kicking off its rollout, with the update making its way initially to those enrolled in the Galaxy Beta Programme. 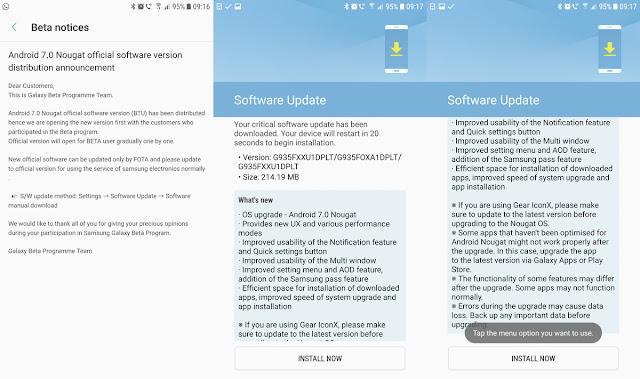 Those that have best tested the Nougat update will be transitioned to the stable build via a forced OTA update that is rolling out gradually. If you’re a beta user and see the system update message, you’ll have 30 seconds until the phone reboots and starts installing the update.

The changelog for the update details several UX and performance fixes, including improvements to notifications, multi-window mode, always-on display, and enhancements to the system upgrade and app installation process. If you’re using the Gear IconX earbuds, you should update their firmware to the latest version before installing the Nougat update.

With the stable OTA rollout now officially underway, it shouldn’t be too long until carrier-specific variants receive the update. We’ll keep you posted as and when the update makes its way to S7 and S7 edge units around the world.