Samsung’s Galaxy Note series has always been a fan favorite. It’s said among followers of the series that the only thing which can replace a Note is another Note. And so after a strong showing earlier in the year with the Galaxy S7 and S7 edge, all eyes are on the Galaxy Note 7, due for arrival in the second half of the year.

As usual, the rumor mill is buzzing with speculation about what we can expect from the latest in a popular line of big-screened phones. And to help you cut through the hype and speculation, we’ve collected all the most reliable info here, in our Samsung Galaxy Note 7 preview.

What happened to the Galaxy Note 6?

You would be forgiven for thinking Samsung had skipped a generation. In fact, the sixth Note will indeed come to market as the Galaxy Note 7, not Galaxy Note 6. So why Note 7? Samsung explains:

With added functionality of the S Pen and large screen, the Galaxy Note7 is a powerful instrument for achievement and self-expression, and is made for those who want to get the most from their phones – and their lives. Galaxy Note7 will help people do more in work, at home and everywhere in between. We can’t wait to tell you more about it!

First and foremost though, you might be curious as to why it’s called Galaxy Note7 instead of Galaxy Note6. There are a couple reasons why. First, the Galaxy Note7 will complement our Galaxy S7 and S7 edge, and unify our product portfolio. Second, the Galaxy Note7 will minimize confusion about the latest mobile technology from Samsung, and provide full alignment with Galaxy S smartphone.”

Our clearest look at the Note 7 to date comes from renders leaked by Evan Blass, showing what appears to be a new Note handset with a curved screen in three colors — black, silver and blue. 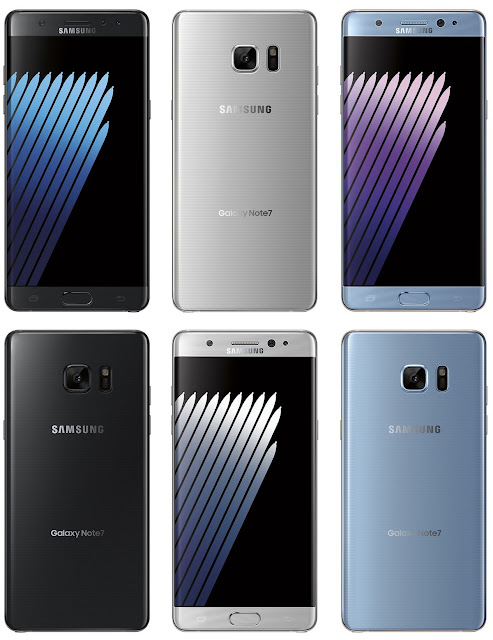 First up, the biggest change: We’re looking at the first Galaxy Note since 2014’s Note Edge to have an Edge screen, meaning Note 7 owners will be able to enjoy the curved sides and extra software features from phones like the S7 edge and S6 edge Plus. In fact, one way of looking at the Note 7 is as a combination of last year’s Note and Edge Plus lines. Instead of two phones, Note 7 owners will get the best of both worlds in one handset.

Besides that, it should come as no surprise that water resistance is rumored to be built in, given that that’s a major tentpole feature for the GS7 line. Nor should it be shocking to see Samsung sticking with its metal-and-glass design language, which has served it well over the past couple of years. The render also appears to show a USB-C port, which among other things (like faster file transfers and charging speeds) would mean Samsung would have to launch a new Gear VR with the next Note.

In terms of aesthetics, there’s a lot of crossover between these renders and the GS7 edge, albeit in a more rectangular design. The Note 7 shown here appears to sport “2.5D” tapered edges and rounded corners, which should give a more comfortable in-hand feel than last year’s model.

The leaked renders are corroborated by real-world photos from notable leaker Steve Hemmerstoffer, a.k.a. @onleaks, showing the same design and curved AMOLED panel.

As much as we’re reaching a plateau in terms of high-end phone specs, raw hardware power remains important. And based on a handful of reports from SamMobile, Evan Blass and USwitch, here’s what we’re expecting from the Note 7’s hardware:

Samsung Exynos 8890 processor (similar or identical to that of the GS7 in Europe/Asia) or Qualcomm Snapdragon 820-series in some markets.


None of these should be considered confirmed, but we wouldn’t be surprised to see a next-gen Note with any of the specs listed here.

Here’s where things get kinda interesting. Early rumors pointed to the Galaxy Note 7 potentially shipping with Android N out of the box, which wouldn’t be out of the question considering the likelihood of an early release for the next version of Google’s OS. However more recent reports suggest Android 6.0-based firmware is much more likely.

Italian blog HDBlog.it recently outed what appears to be an future version of Samsung’s TouchWiz software, which seems to have been designed around Galaxy Note-level hardware. (The firmware was shown running on a Note 5, for what that’s worth.) The look and feel isn’t a dramatic departure from TouchWiz as seen on a Note 5 or GS7 today, but Samsung does seem to have tightened things up visually, while leaving the core look and feel of the GS7’s software intact.

The most interesting feature is shown in the TouchWiz launcher, where a gesture activates certain secondary functions for apps, much like 3D Touch on an iPhone 6s. That’s not guarantee that this technology will be included — after all, on a Note, it could well be implemented through the S Pen or, as shown in the video, through a simple swipe gesture. But there’s one crucial distinction: This next-gen TouchWiz appears to be based on Marshmallow, not Android N — note the old-style notifications and Multi Window implementation in the video above.

Last year’s Galaxy Note 5 launched in the United States in late August, closely following a mid-August announcement event. This year the Note 7 will make its debut at a New York City launch event, with satellite events in London and Rio de Janeiro.

(And yes, that means we’d absolutely expect a European release for this year’s Note, after Samsung strangely opted not to launch the Note 5 in that region.)