Sep 24, 2016
Cabin crew on an Indian passenger aircraft have used a fire extinguisher to tackle a smoking Samsung handset. 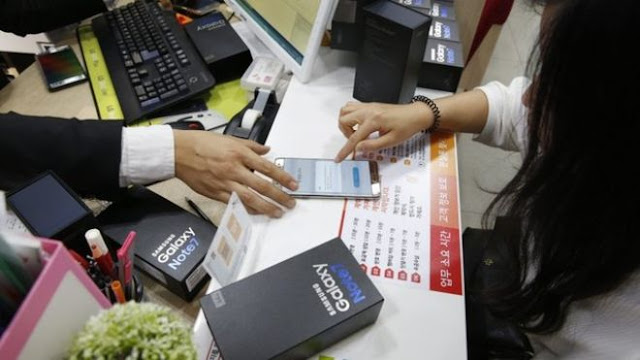 The Note 2 handset was smouldering and spitting sparks, according to a statement from airline IndiGo.

The incident comes as Samsung recalls millions of new Note 7 devices because of faulty batteries.
IndiGo said no-one was hurt during the incident, on flight 6E-054 from Singapore to Chennai.
Passengers told the aircraft’s cabin crew about smoke emerging from an overhead luggage compartment which, when opened, revealed the smoking phone in a piece of hand luggage, it said.

Once doused with an extinguisher, the sparking phone was put in a bucket of water in the plane’s toilet and kept there until the aircraft landed.

“The aircraft made a normal landing at Chennai airport, and all passengers were deplaned as per normal procedure,” IndiGo told Reuters.

In a statement, Samsung said: “We are aware of an incident involving one of our devices. At Samsung, customer safety is our highest priority.

“We are in touch with relevant authorities to gather more information and are looking into the matter.”

Earlier this month Samsung issued a worldwide recall for its new Note 7 phones because faulty batteries can make the devices catch fire while the handset is charging or being used. Samsung is offering free replacements or refunds.

Before now, no similar problems with the older Note 2 have been reported.

The problems with the Note 7 have led many airlines to tell passengers to keep the phones turned off during a flight.

In the US, the Consumer Products Safety Commission said it had received 92 reports of faulty Note 7s overheating. Of those, 26 involved left owners with burns and 55 caused property damage.