Jan 15, 2018
Smartron, the Indian smartphone brand, a couple of days ago launched its first smartphone for the year, the Smartron t.phone P. Priced at Rs 7,999, the device packs a punch when it comes to features. For the asking price, Smartron is offering a Snapdragon 435 SoC, a beefy 5000mAh battery, metal body, and a 13MP rear camera. These specifications sound a bit familiar, right? Yes, they are almost identical to those of Xiaomi Redmi 4, which was the second best selling smartphone of 2017 in India. 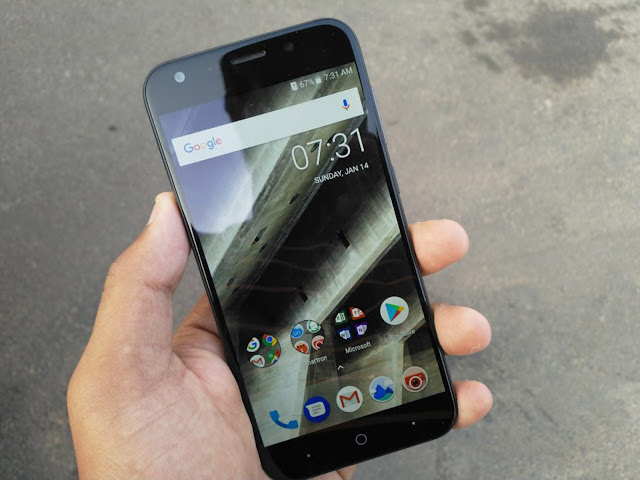 Next up, we have that 5.2-inch HD display, which has decent viewing angles and gets bright enough to view the text during daytime conditions under sunlight. The phone has a 2.5D curved glass on top, which further adds value when it comes to look and feel of the smartphone. The company did not mention the protective layer used on display though. At the back, there’s a fingerprint scanner, which is fast in unlocking the device but not as fastest as the one present on the Redmi 4 though.

The highlight of this smartphone is the hardware under the hood. Smartron has gone with a Qualcomm chipset, instead of MediaTek chipsets. In fact, if you are not aware, Smartron is the only Qualcomm license holders in India. The phone has an octa-core Qualcomm Snapdragon 435 chipset, coupled with 3GB of RAM and 32GB of internal storage. Instead of confusing users by launching multiple variants, Smartron has launched only the 3GB/32GB storage variant. Storage can also be expanded with a hybrid microSD card slot. 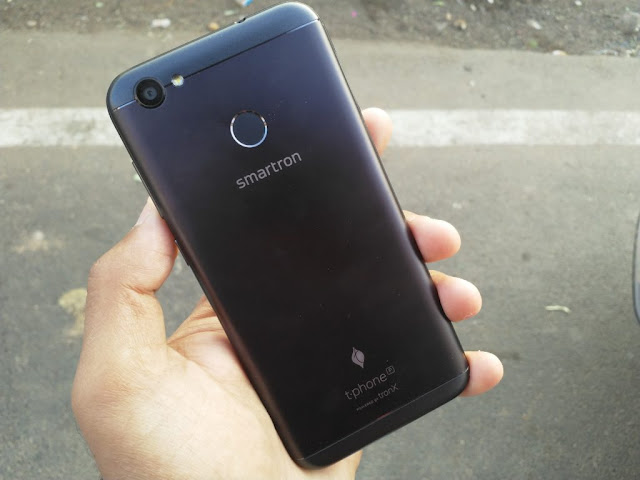 During my short usage, the phone opened up all the system apps real quick without breaking a sweat. But the performance will be tested during our review period. Next up, we have that USP- the 5000mAh battery inside the smartphone, which as per Smartron will last for two days on a full charge. Also, the smartphone can be used to charge other devices with the help of USB OTG feature.

Here comes another major design aspect where Smartron needs to be appreciated. With a huge 5000mAh battery, you may assume that the phone’s weight must be huge, but that’s not the case with this t.phone P as it weighs 160 grams. And the good part is the weight is evenly distributed too which makes the phone comfortable in hands.

Now let’s get to those cameras. The Smartron t.phone P has a 13MP rear camera at the back, which is followed by a 5MP front-facing camera. The camera app interface is slightly tweaked, and the phone even offers a manual mode, which is a rarity in that price. Don’t expect the camera to offer good performance, but expect it to be in-line with other budget smartphones.

The smartphone ships with Android 7.1.1 Nougat out of the box and the company even confirmed the Android 8.0 Oreo update roll out to the phone very soon. Software is the major letdown for this smartphone. Don’t get me wrong. The phone runs on Android Nougat, but Smartron is moving away from keeping the interface close to stock. If you consider Smartron’s earlier smartphone, the t.phone and the srt.phone, they offered stock Android with multiple third-party apps from Microsoft.

But that’s not the scenario with the newly launched t.phone P as Smartron has modified most of the interface elements. For example, the notification center, quick settings panel, Settings app, Dialer app, etc. are modified by the company. According to me, this is a bad move as keeping the interface close to stock will allow the company to roll out software updates very quickly, but now, they will be delayed. Also, the forthcoming Android Oreo update for the srt.phone may bring this interface. The good thing, however, is that Smartron did not try to add any new features to the interface.

Lastly, we get all the basic connectivity options such as 4G LTE, VoLTE, Wi-Fi 802.11 b/g/n, Bluetooth, GPS, and a micro USB port. Like the earlier Smartron devices, the t.phone P also comes with free cloud 1000GB cloud storage on t.cloud, which allows to backup your photos without worrying about the loss of internal storage.

Overall, the Smartron t.phone P ticks almost all the boxes in the budget smartphone category. For Rs 7,999, you get a good-looking device, tested Snapdragon 435 processor, fast and accurate fingerprint scanner, 5000mAh battery, and of course a power bank too.

When compared the t.phone P with Redmi 4, the former has the upper hand in the design and battery segment, and of course in the RAM and storage department too. The Redmi 4 with 3GB of RAM and 32GB of storage is available at Rs 8,999. But I personally feel that Smartron is a bit late to the party as Xiaomi will launch the Redmi 5 with Snapdragon 450 SoC very soon in the Indian market, which will make a Snapdragon 435 SoC powered t.phone P an outdated one. But at least for now, you can pick up the t.phone P if you’re in search of a battery beast on budget. Interested customers can head over to Flipkart on January 17 to purchase the product. Also, make sure you rush to the e-commerce site first as Smartron will be selling the phone in flash sales.