Windows 10 Redstone 2: Everything We Know (So Far)

Coming next Spring: Redstone 2, the next major update to Windows 10.

Microsoft is now hard at work developing the next major update for Windows 10. Codenamed ‘Redstone 2’, this next update is rumored to launch in the Spring of 2017 and will focus on productivity improvements for the desktop, and will bring much-needed features and enhancements to Windows 10 Mobile users.

Microsoft began development of Redstone 2 a couple of months before Redstone 1 (Anniversary Update) was signed-off internally. This is standard procedure for Microsoft engineers, as it allows them to start planning features and working on them ahead of time. The company says the first several Redstone 2 builds will not include new features, as they are currently working on refactoring OneCore, the subsystem of Windows 10 that helps make it scale universally across many devices.

Redstone 2 was originally scheduled to launch later this year, and be a much smaller update when compared to the Anniversary Update. However, due to some internal delays and the company wanting to wait for new Surface hardware to release, Microsoft decided to pull back on plans to launch Redstone 2 this year and reschedule it for an early 2017 launch. Because of this, the Anniversary Update was the first (and only, hopefully) update to launch on its own within a single year.

Redstone 2 will focus on productivity improvements for the desktop and much-needed features and enhancements for mobile.

Because Redstone 2 has been delayed, Microsoft can make it a much bigger update than originally planned, which is great news for Insiders and consumers who like to use new features. 2017 should see Microsoft launch two major updates for Windows 10: Redstone 2 in early 2017 and then a Redstone 3 in the summer/fall of 2017.
Microsoft has just started rolling out Redstone 2 builds for Insiders to test, via the rs_prerelease development branch. This is where Insiders will be getting their Redstone 2 Insider Preview builds when Microsoft releases them. PCs are the first to get new Redstone 2 preview builds, with Mobile builds following in a few weeks.
The Redstone 2 Insider Preview is just getting started, meaning we have several months of development left before this next update is ready for the public. Insiders are encouraged to begin submitted feedback and ideas now for Microsoft to start implementing them. 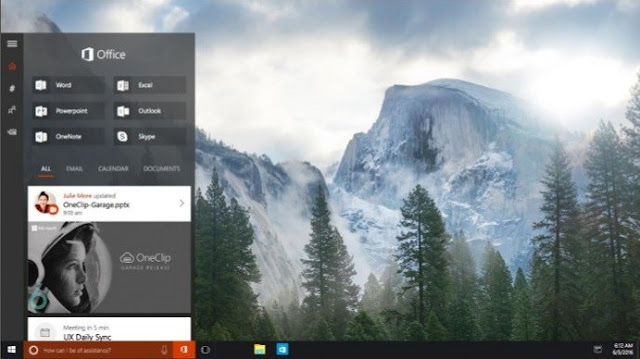 One of the features that Microsoft is working on is the “Office Hub”. It will more tightly integrate Office 365 and Windows 10, providing easy and quick access to documents, email, and calendar. While there are a few options for where the Office Hub could live, the most promising is in the task bar alongside the Start Menu and Cortana.

Oftentimes a project consists of more than just a single Word document or PowerPoint. It’s emails and images and contacts and documents and spreadsheets and a dozen other files and appointments and people. Working Sets will let you organize everything related to a project into a set, even if it lives in different apps, and even pin it to the Start Menu as a live tile.