Last October, Qualcomm announced that it is partnering with Netgear, Ericsson, and Telstra to roll out the world’s first Gigabit LTE network in Australia. In an event in Sydney, Telstra has announced that the network is now operational. The carrier showed off demos of the network in action, with download speeds in excess of 930Mbps and uploads of over 130Mbps. 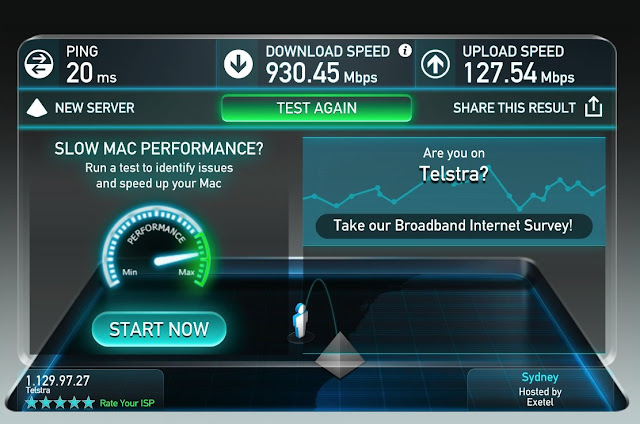 The first device to support Gigabit LTE speeds is Netgear’s Nighthawk M1 mobile router. The router features a Snapdragon X16 LTE modem, which offers 4X4 MIMO, and 4-band carrier aggregation. The portable router can connect up to 20 devices, and has a built-in battery that is rated for up to 24 hours of continuous use.

The router can even charge your mobile device while delivering Gigabit-class speeds, and comes with two USB ports (Type A and C) along with an Ethernet port. The router will be available starting next month for AUD360 ($270) outright, and there’s also the option of bundling it through Telstra’s plans.

The network itself is now live in CBDs (central business district) of Brisbane, Sydney, and Melbourne, and will be rolled out to more areas in mid-February. Here’s what you’ll be able to do on the Gigabit LTE network:

Download a typical 3.5MB song in a fraction of a second

Download a 20MB PowerPoint presentation in as little as one second

Download a 3GB HD Movie in as little as 3 minutes

We are proud to support the launch of the world’s first commercial Gigabit LTE product through our close workings with Telstra, NETGEAR and Ericsson. The Qualcomm Snapdragon X16 LTE modem is the first commercial modem in the world to make these game-changing speeds and user experiences possible.
Qualcomm’s Snapdragon 835 also uses the same X16 LTE modem, so all phones that feature the SoC — with the LTE modem enabled — will be able to take advantage of Telstra’s Gigabit LTE. As for when other carriers will implement Gigabit LTE, Qualcomm has stated that it is trialing the service with 15 carriers in 11 countries.