Jan 13, 2018
Xiaomi is now rolling out a new software update to its Android One smartphone, the Xiaomi Mi A1. The update brings the January 2018 security patches and weighs 89MB in size. To receive this update, you must be on the Android 8.0 Oreo update which was rolled out a couple of weeks ago. Also, with this update, the company brought back the ‘Fingerprint Swipe Gestures,’ which was removed in the Oreo update with version 7.12.29. 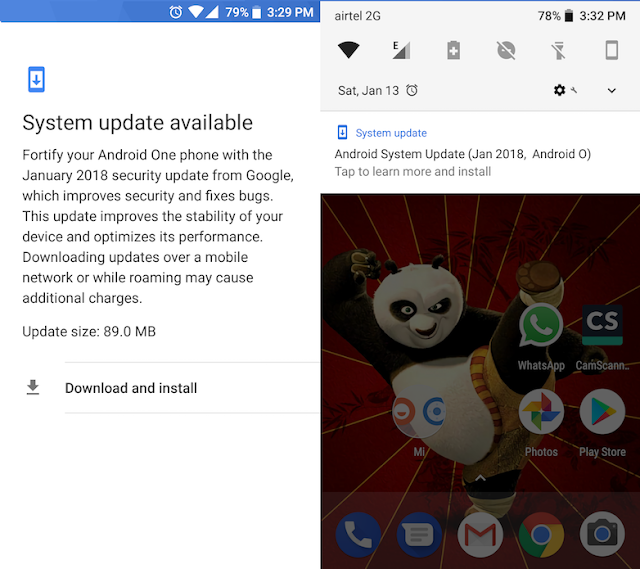 This new 89MB update takes the device to version number 8.1.10. The entire installation process took over just five minutes. Once the update gets downloaded on the device, it will install in the background itself, after that it will ask you to restart the smartphone, which will reflect the changes.

It’s unknown whether Xiaomi is rolling out the update to every Mi A1 user with Android 8.0 Oreo or whether its a phased rollout. However, when I checked update on my review unit, it did not show up. But on the other Mi A1 unit, the update showed immediately. So maybe the update is rolling out in batches. To check the update manually, head to the Settings app and go to System Updates section.

Yesterday, we reported that Xiaomi temporarily suspended the Oreo update to the Mi A1 as the company finished the first phase of roll out. Xiaomi may now include the January security patch fixes as well when it starts the second phase of roll out.

It was also reported by many Xiaomi Mi A1 users that the Oreo update brought in way too many issues to the smartphone. Some users even said that their device wasn’t able to make a voice call after updating the smartphone. Some issues in the official Oreo update are camera app taking a lot of time to load, contacts issue, massive battery drain when Bluetooth is turned on, and so on. At this moment it’s unknown whether Xiaomi fixes this issues in the latest update or not.